This is a great opportunity to support a fellow author and homeschool graduate.

“Flight School: One Summer, Many Choices” 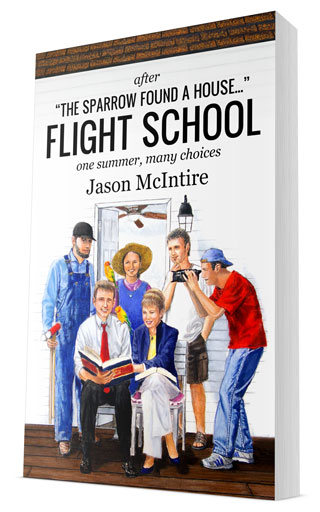 If you’ve read The Sparrow Found A House by Jason McIntire (Elisha Press, 2013), you’ll already know his style: Real-life situations addressed with equal parts humor and biblical wisdom. It’s a combination reviewers find powerful. They’ve used the words intriguing, believable, captivating, and unique – among many others – to describe his writing. The Sparrow Found A House (which is available as a free Kindle download from Elisha Press) was also endorsed by Exodus Mandate, the prominent homeschooling action group. It tells the story of the Rivera-Sparrows, a newly-blended and newly-homeschooling family facing opposition from without and within.

Today Elisha Press is announcing the release of a sequel to The Sparrow Found A House – and to celebrate, they’re giving away signed copies to four randomly-selected winners. You can enter the giveaway here, or go ahead and order the book on Amazon. It’s $2.99 for the Kindle version, or $9.99 for the 256-page print edition.

Flight School follows the Rivera kids as they meet new friends, explore careers, and encounter the challenges and choices that come with adult life. As a homeschool graduate himself, Jason knows the things that matter most to homeschoolers, and how to write about those things in a way that will edify, resonate, and entertain.

A 2005 homeschool graduate and partner in family business ventures, Jason McIntire writes as a hobby. His Christian stories are built around solidly biblical ideas, but packaged in his own light-hearted, often humorous style.